Hey, so it’s been awhile.  Life and work intruded.  But our genealogy hasn’t changed, and our knowledge especially of our ancient genealogy based on our DNA continues to evolve.

This article is a continuation of our look at Vance DNA Groups 1 and 2 within what’s called the L513 SNP.   To see more about that SNP and these two groups in general, see our first article on Y-DNA testing.  Here I’ll talk about what we know about Group 1, which is important partly because it includes the lineal heir of the Scottish Lairds of Barnbarroch, and so has been tied to the traditional descent of the Vance surname.  If you need a refresher on that Vance history, read our explanation of A Short History of the Vance Surname.

The coming of “affordable” (meaning less than about $600) exploratory Y-DNA testing in recent years has generated an explosion of Y-DNA testing by people hoping to find out more about their male-line genealogy. Under L21 alone there are more than 14,000 men currently recorded in the DNA project database.   That’s a lot, but it only scratches the surface of the total population of L21 men among the 3.5+ billion men in the world.   The more people test their DNA, the more our knowledge of the origins and spread of our ancient genealogy increases.

I say “ancient” because what Y-DNA testing has told us so far is mainly about our male-line genealogy back before surnames were first adopted about 1000 years ago.   We are only just starting to see clues to where these male lines have been living from about 1000AD forward.

So what of Group 1 specifically?  In Y-DNA terms, the Group 1 members of the Vance/Vans/etc surname project are part of what has been known until now as the L193 subgroup of L513.  The L193 subgroup is known as a “superfamily” of various Scottish family names with a strong association with southwest Scotland near Ayrshire and Galloway (although as I said in the first article, its origins are still under fierce debate).  The current structure for this sub-tree of L513 looks like this: 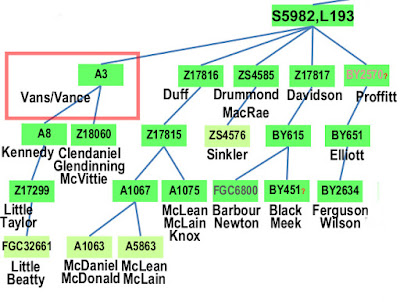 What does this mean?  So adding a few (approximate) timelines to the tree, the story unfolds like this:

Some time about 500 AD (give or take a few hundred years) a man was born with the L193 SNP mutation.  His descendants appear to be of uniformly Scottish origin, so perhaps (more about this later) he was born in Scotland.   At some point however before or around 1000AD, one of his descendants was born with the A3 SNP mutation.  HIS descendants then split into two lines – one became the Vans/Vance line which includes today’s Vans of Barnbarroch families, and the others split into two lines themselves, one of which gained family names of Clendaniel, Glendinning, McVittie (and others), and the other which became family lines of Kennedy, Little, Taylor, and Beatty.

Working backwards, we know that some of the Vances in Group 1 can trace their ancestry back to the 1700s, so clearly the A3 SNP line was part of the Vans surname for several hundred years.  And in fact, the split into Vance Group 1a and 1b is also very old (probably back to the 1300-1400s), so we can be pretty sure that A3 was the DNA of the male line of the Vans family of Barnbarroch back to around the time that Barnbarroch was founded.  Other scenarios are possible in theory, but they’re just too much of a stretch.

But the Vans line of Barnbarroch was supposed to be founded by the Vans of Dirleton, who themselves were a Norman family who reached Scotland sometime around 1100-1200.  If the L193 and A3 lines look like they are of old Scottish origin, does this mean that the ancestry of the Vans of Barnbarroch is NOT Norman?

Possibly, but not necessarily.  Of course, it IS possible that the Vans of Dirleton or Barnbarroch adopted a son from an ancient Scottish line who brought the A3 SNP into the family DNA.  That was not uncommon in medieval times and might not have been recorded.  But movement between the British Isles and the European continent was VERY common for thousands of years before and during this time.  L513 descendants, for instance (but not yet L193 descendants) have been found in Scandinavia, Germany, Belgium, and other parts of Europe besides England, Scotland, and Ireland.  It is not inconceivable that a L193 descendant might have emigrated to Scandinavia or Europe and his line some few hundred years later came back to Scotland among the Norman settlers.  An interesting event if it occurred, but certainly within possibility.

Without having those to tell us how the Vans/Vance lines evolved, our best chance at learning more about these lines is just for more men to continue to have their Y-DNA tested and having more L193 descendants identified.   For instance, finding European descendants of the A3 SNP would help us understand more about the spread of this subgroup that includes the Vances of Group 1.