Another in our continuing updates on the Vance DNA groups; this one is about Vance DNA Group 8.

If you remember this group it includes the US descendants of Thomas James Vance b.1795 of Newton Co, Mississippi and James Alexander Vance who d. 1821 in South Carolina.  The group also includes two lines still remaining in Ireland, and may have connections to several of the Vances mentioned by William Balbirnie in his book on the Vances from 1860.  All the background on the group is available in Adam Bradford's excellent summary indexed under the DNA pages of this site or at http://www.vancegenealogy.com/Group%208%20Overview.pdf.

The male line origins of this group have been found to belong to the Y-DNA haplogroup U152, which is a SNP that originated about 4400 years ago (using the ageing estimates by YFull).  Recent research on ancient burials has located several U152 men among ancient Bell Beaker groups and it has been tentatively linked with the spread of the Hallstadt and La Tene cultures although it was almost certainly not the only major SNP spread by those migrations.

U152 and its subgroup, L2, have been found at low frequencies today throughout the British Isles but most frequent in eastern and southern England, as well as around Durham, Lancastershire and southern Cumbria, and Midlothian and Berwickshire in Scotland.

Famous other lines of the L2 subgroup may have included George Washington and Abraham Lincoln, but the subgroup is also over 4000 years old so it has a wide spread of descendants today.

Vance Group 8 sits below L2 on a branch of SNPs under L2 with a terminal SNP called BY3507 as shown in the picture below.  Ages on this picture were taken again from YFull for consistency. 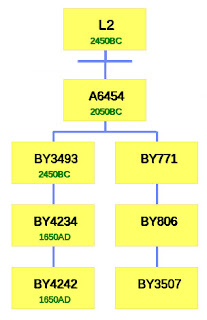 While the BY3507 branch has not been dated, a lot of research has gone into mapping its SNPs in detail.  That picture (taken from Alex Williamson's Big Tree) looks like this: 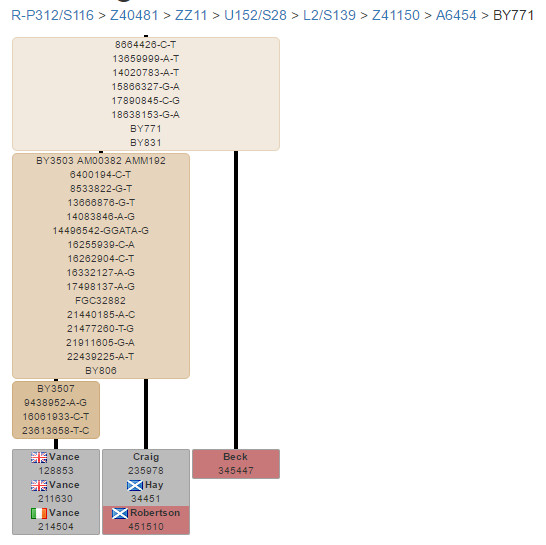 Adam Bradford's original report on Group 8 included a possible connection with the Hay tester shown, but the SNP results are clear that the connection is back somewhere near 1400-1650AD when the Vance line broke off and other surnames - Craig, Hay, and Robertson, continued along separate lines.  Based on the known geographic distribution of these lines it is likely that the common ancestor already lived in the British Isles, but where exactly is not known.

DNA testing today includes both SNP and STR testing, and when both are combined with genealogy data we can start to see a picture of how the descendant lines may have evolved.  That picture is shown below (you may need to click on it or download it to enlarge), although I'll stress this is a likely tree only since it is partly based on STR statistics of how the STRs most likely mutated.  Different assumptions would cause the tree to look slightly different.

What does this show?  It shows that the Craigs, Robertsons, etc broke off very early from the Vances and all share the STR value of DYS576=18 .  The Vance line continued and resulted in the lines of James Alexander Vance and Thomas James Vance.  It shows as expected that kits 181224 and 192176 are older branches (these are the Irish branches), but it also suggests that kit 214504 is from an older branch as well.  The other Vance branches share the STR value DYS461=12 and so are likely all descended from a more recent common ancestor, although kit B3040 is not a known descendant of either James Alexander Vance or Thomas James Vance.

So combining all the data is starting to show us how all these lines are related to each other.  Where they all came from originally though is still uncertain but as always in genetic genealogy, more testing and more analysis should help map these lines in increasing detail.

Posted by Dave Vance at 4:09 PM No comments: