For those of you who follow the DNA testing, the last blog update we had on Vance DNA Group 2 was this post from November 2015.

Vance DNA Group 2, if you recall, comprises a group of about 8-10 immigrant Vance lines from Ireland into the US between about 1730 and 1840, and one line surnamed Whalen who emigrated to Canada.  Notable descendants include Abner Vance of Abingdon, VA and Jim Vance of Hatfield/McCoy feud fame.

At the time of that last post, SNPs Z23507, Z23506, and Z23516 had been identified as major signposts within Group 2, and the descendant picture looked like this: 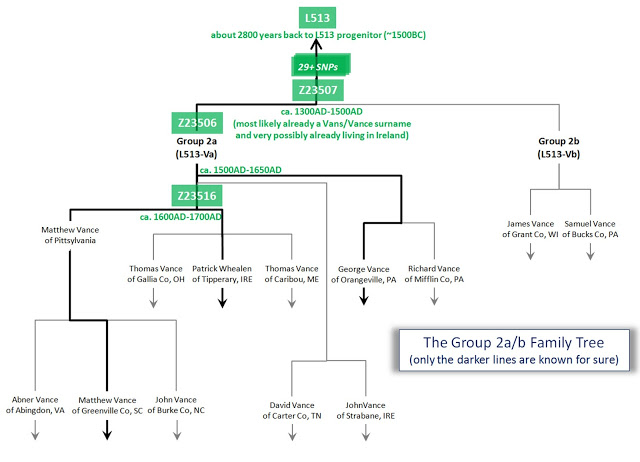 After another year and a half's worth of further testing, the picture has changed somewhat although the major SNP signposts still remain.  The following chart summaries the group's SNP signposts in yellow, with major STR mutations shown in red boxes along the various descendant lines: 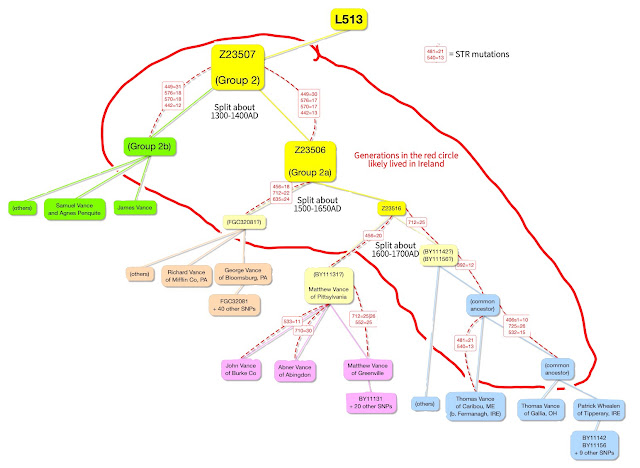 You'll see the major SNPs that mark Group 2's branches marked in bright yellow above - first, SNP L513 which is the "major subclade" formed about 4000 years ago.  Group 2 is identified by SNP Z23507 which occurred about 2800 years later.  Groups 2a and 2b split off from each other about 1300-1400AD (give or take), and Group 2b (the green boxes in the chart) does not have any defining SNPs identified for it yet (there surely ARE some, there just hasn't been enough testing in Group 2b yet to tell).

Group 2a splits into three major branches.  The branch that split off first includes the lines of Robert Vance of Mifflin Co, VA and George Vance of Bloomsburg, PA (the rose boxes in the chart) - this branch split off about 1500-1650AD.  Then at some point later along the other subbranch, SNP 23516 formed, and after that the line of Matthew Vance of Pittsylvania split off from the others (the purple boxes in the chart).  Matthew's line continued with John Vance of Burke Co, Abner Vance of Abingdon, VA, and Matthew Vance of Greenville's lines.  The other Vance lines continued as shown in blue in the chart.

The chart also shows (in the red circled area) the generations that lived in Ireland.  How do we know this?  Well, each of the major branches (green, rose, purple, or blue boxes) have immigrants that are known to have either been born or lived in Ireland.  For all those immigrants to have come from the same location, it is reasonable to assume that the major lines continued to live in that location.

The STRs are marked in the chart above so that male descendants of these Vance lines can look for these STR mutations in their own Y-DNA tests.  Or, if you are a male Vance who has had their Y-DNA tested, you can check your own STRs and see if any of these mutations exist in your own DNA - which would mark you as a descendant of that particular Vance line.

While the chart above is useful it is really a simplified version of the full "mutation history tree", which you can see in the chart below (click on it to expand it for readability).