Do you know what Vance DNA Project group your Vances came from?

The Vance DNA Project is one of over 7,400 surname projects established to help research the ancestry of a surname through DNA.  Virtually all of these projects make use of testing on the Y chromosome which are passed along from fathers to sons, because traditionally in Western society a surname is also passed along in the same way.

The Vance DNA Project has been around for over 10 years now and originally identified 8 separate Y-DNA origins for men with the surname "Vance".  In 2011, administrator Adam Bradford produced detailed reports for these 8 groups, marrying traditional genealogy research with new DNA connections.

Recently the reports for these 8 groups have been updated and Adam Bradford's original reports have been updated with new analysis.  There have also been 8 new DNA groups identified for a total of 16!  These new groups will get new reports as well rolling out over the next few weeks.

To find these reports, start with this link for the Vance DNA Project:  https://www.familytreedna.com/groups/vance/about.   You should see a page that looks like this: 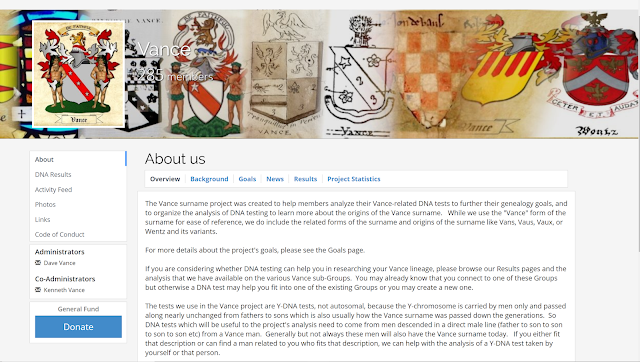 From there, you can read the Overview of the Project and pages on Background and Goals.

Once you're done with those pages, click on the Results tab.  At the top you can read about the general state of the Vance DNA Project, and links if you want to learn more about how the testing and analysis are performed.

Then scroll down until you see this table: 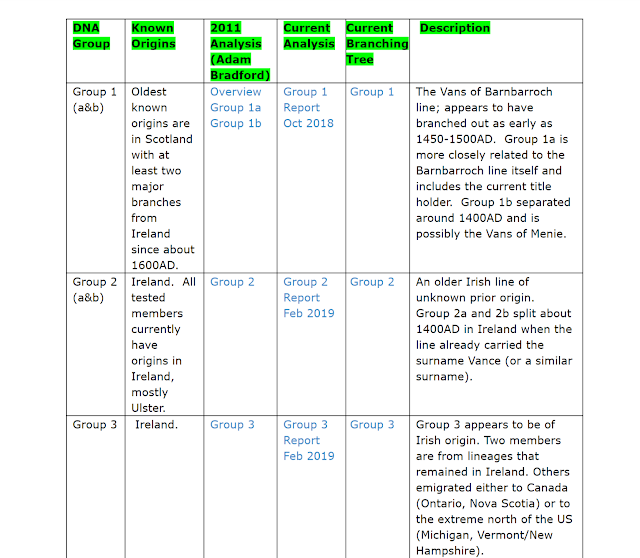 This table has all the available information organized about each Group in the project.  First, the known origins are summarized under Known Origins.  Next comes a link to the original 2011 report by Adam Bradford (where available), and then a link to the current analysis report (in most cases, just published in February or March).  Each of the current analysis reports includes a tree graphic which attempts to organize the current members into how the DNA mutations suggest they are related in the male line; this tree is included in each Current Analysis report but is also provided as a separate link in the next column for each reference.  And finally, a more detailed summary of each Group is given in the last column.

Only the first 8 Groups have analysis reports so far, but as said above the other Groups should be getting their reports over the next few weeks.

If you have any questions or comments, please contact the DNA administrator, Dave Vance - his email address is given as a link on the left-hand side of those Vance DNA Project pages!
Posted by Dave Vance at 1:47 AM No comments: