This is really a US-based point and about general genealogy rather than just the Vances.  But I think the charting methods I describe below are a fun exercise for anyone descended of immigrant families.

If you're descended from Vances in the USA, whether they were of Irish or German origin it still means that line immigrated to the US back in the 1700s or 1800s so you have probably at least 4-6 generations in the US by now.  Possibly your other ancestral lines are equally old.

What happens in the US at least is that in some cases new immigrant families will cluster with others from the same home country and keep their language and original culture alive.  Their children are then raised in an environment very aware of their origin country's language and culture and they may choose to pass those on to their own children.  In other cases a new immigrant family will adopt local language and culture as fast as possible; so although their children may know something of their origins they know very little of their original country, and generally the grandchildren in turn won't have more than maybe a few artifacts and no personal knowledge of that background.

Of course there are insular groups that stick together longer, but for many of us that means that somewhere between 3 and 5 generations after immigration, descendants will have lost the language, stories, heirlooms, cultural traditions, and other ties to the country of origin.  They MIGHT remember older relatives that still kept those traditions, but those roots fade into general awareness usually without much personal association.

For many of us in the US, somewhere among the approximately three generations alive today are where that point was reached for all of our ancestral lines.  We (or perhaps your parents or your children) are often the first generation with little to no personal experience with the cultural identities of any of our immigrant ancestors.  I'm not saying that that's a good or a bad thing, by the way.  But it IS one reason, for instance, for the continuing popularity of genealogy in the US.

I'll use my own ancestry to demonstrate this effect in a fun chart that you may find useful.

Many genealogists are familiar with showing their ancestry in a pedigree fan chart, with themselves in the middle, their two parents in the next outer ring, and so on out in a circle as many generations as you like.  For instance, here is my known family tree out to 6 generations, which incorporates all my known immigrant lines: 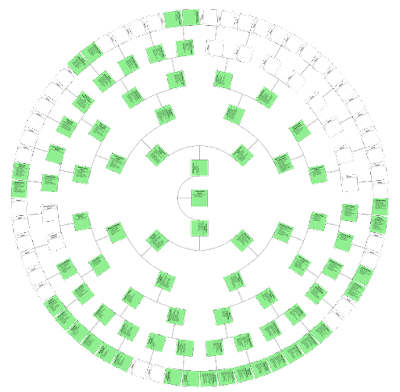 Now draw a pie chart behind the fan chart that forms a "pie piece" from every one of your 6th generation ancestors (or however far back you choose), and color the pie pieces based on their country of origin.  The colors don't matter, just pick a different one for each country.  When I do it, I get this: 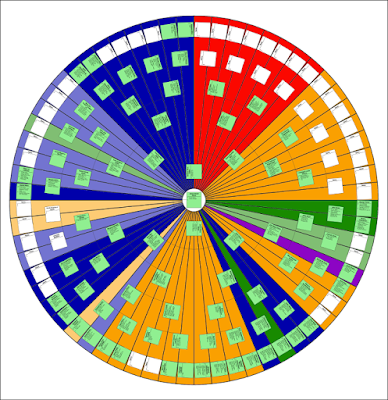 (I used faded colors where I was less sure of the origins, but that's not necessary).

The first conclusion, of course, is that I'm a real mutt with many different countries in my ancestry.  My Irish Vance line, by the way, is the small green wedge to the right - I actually have very little Irish ancestry even though it's my surname line!  But the other conclusion is that I have large swaths of certain country ancestry (in my case British (blue) and German (yellow)).  These large swaths show more recent immigrant ancestry.  And in fact I have dim memories of ancestors who felt more connected to their origin countries than I do.

Take a look at similar charts for my parents though: 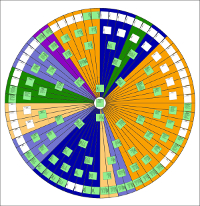 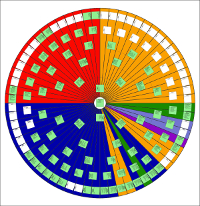 My colors of course are a combination of theirs.  But see how they're mostly made up of  VERY large swaths of the same colors?  Both my parents (especially my mother, on the right) remember ancestors who still kept cultural traditions from their home countries and even (for her German ancestors) still spoke the language of their country of origin.  By my generation, those experiences didn't exist.

Now in the other direction, look at how much of a patchwork my children are: 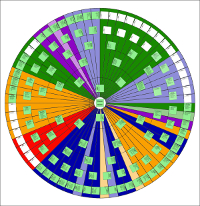 The only surprise for me through this exercise is that while the US is always considered a "melting pot", it's only recently that the final effects of that mixing are occurring.  But for those of us with a mixed country ancestry background, it's an interesting look at how far removed (or not) we are from those influences.

If you'd like to repeat this exercise for your own family lines, here's a template you can use to make the same fan chart for yourself.