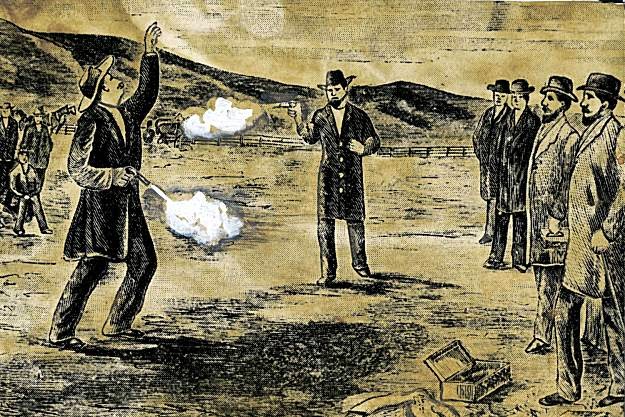 I recently came across a reference to the 1827 Carson-Vance duel in western North Carolina (see below) and it got me wondering how many Vances in history became infamous through violence.

All of the Vances that I'm aware of who famously met their end through violence are, for some reason, in the U.S. (does that mean something?).   Most of us of course are familiar with James "Jim" Vance and his role on the Hatfield side of the Hatfield and McCoy feud along the West Virginia/Kentucky border in the late 1800s.  But did you know his grandfather was also an infamous Vance?  Here are the ones I know of in chronological order:


Abner Vance's story has become a legend of the American frontier.  He lived on the Big Sandy River in Russell County, VA, where in 1817 he was arrested and indicted for the murder of Lewis Horton  (the "usual" folk story says his daughter Elizabeth ran off with one of the local Horton boys, but the court records don't mention that at all).   Abner was convicted of murder in his first trial, but won the right to a change of venue and a second trial.  Unfortunately he was also convicted in the second trial and was finally hanged in July 1819 in Abingdon, VA.

During his long imprisonment Abner composed "Vance's Song", a folk ballad about his plight still considered the oldest known song composed west of the Blue Ridge mountains.  More about Abner's life and trial is available on the Internet, for instance here and here.

Abner's daughter Elizabeth never married but went on to have at least two sons and a daughter.  One of her sons was Jim Vance of Hatfield and McCoy fame.

A lot of research on Jim and Abner has been compiled by Barbara Vance Cherep and the court documents and other records she has collected present a very different picture of their lives than the violent men often shown in popular culture (or recent TV shows)!

A personal note:  DNA testing has shown that these Vances are related to me, but our common ancestor is before the 1750's somewhere back in Ireland!


Robert Brank Vance was NC Gov. Zebulon Baird Vance's uncle and a successful politician in his own right who served as a U.S. Congressman for North Carolina in the 1820s.   While campaigning for re-election in 1826, he exchanged insults with his (eventually successful) opponent Samuel Price Carson.  The exchange grew so rancorous that Carson finally challenged Vance to a duel, which was held on Nov. 5, 1827 at Saluda Gap (apparently across the state line into South Carolina because dueling was illegal in North Carolina at that time).  While both men were considered good marksmen, Carson had better aim that day, and Vance died from his wounds the next day.

Because of the prominence of the two men the duel attracted much attention.  It is said (although I have not verified it) that Davy Crockett was one of those present at the duel.

More information on Robert Brank Vance can be found at Wikipedia or here (starting on p. 359).


Zeb Vance was the Confederate Governor of North Carolina and is still arguably the most well-known American Vance in history.   While he did not meet his end in violence, he DID come close - in 1855 he criticized his cousin James Baird enough so that Baird issued a challenge to a duel.  Vance accepted, but relatives stepped in at the last moment and stopped it.  Then in 1859 just like his uncle before him, Vance and his campaign opponent David Coleman traded insults until they exchanged formal letters and agreed to a duel.  This time it was friends of both men who intervened and prevented the tragedy.


A note:  I have avoided calling him "Crazy Jim" or "Bad Jim" because there is considerable debate over whether those nicknames were ever applied to him during his lifetime.  Surviving records (compiled by Barbara Vance Cherep as mentioned above) present a picture of Jim Vance as a law-abiding and respected land-owner; very different from the "usual" portrayal of Jim Vance.

The Hatfield and McCoy feud story has filled many books and I won't go into all that history here.  Jim Vance was the brother of Nancy Hatfield and both were children of Elizabeth Vance, and while their father was never documented, it has recently been shown through DNA testing that the father of their brother Richard Vance was John Ferrell.    As to the feud, although the role that Jim Vance played is still debated, there is no doubt that the McCoys saw him as an active player.  In 1888, Frank Philips (a McCoy partisan) led a party of men from Pike County, KY across the border to Vance's home in Logan County, WV where they first wounded and then killed Jim Vance.  The feud itself would go on for another three years and the resulting trials lasted another decade after that.


Does anyone know of other infamous Vances?


The legendary ancestors of the Irish and Scottish Vances, the de Vaux family of England and Scotland, have more than one case of infamous ancestors who may be in our family trees.  One example is Robert de Vaux of Cumberland in northern England, who lived in the 12th century.  The de Vaux family had been granted the barony of Cumberland by King Henry II in 1158, but were struggling to hold on to it because it was still full of Scots who thought it belonged to them.   According to the story, Robert de Vaux invited the Scottish chieftain, Gille Bueth, to his home for a reconciliation, but then treacherously ambushed and killed him.  That story was repeated for centuries, but has more recently been dismissed by later historians.

Whether true or not, the story of the murder has long captured local attention.   A late as the 19th century Robert de Vaux was the subject of a fictitious ballad called "The Bridal O'Naworth" where, after the murder, the ghost of Bueth appears to him on his wedding day and frightens him so much that he founds the priory of Lanercost on the spot in remorse!

I know every family tree has its nuts and bad apples, but the Vances (in stories, at least) certainly have their share of infamous ancestors!